The finished product, without mattress(es)

We bought our Rykene bed second-hand.It was painted grey, had Sultan Lade slats and its headboard had already been sawn off by the previous owners. So basically we just had wooden sides and legs, slats and two 70 X 200cm mattresses. Fine for a tiny spare room.

When the Ikea 2012 PS collection came out, I fell in love with its pull-out bed. The pull-out method is really smooth and clever and better than that of the Hemnes, but also comprises two slatted single beds where the slats of one slide into the gaps between the slats of the other.
I couldn’t justify the cost for the spare room, and to save every centimetre would have had to remove the curving headboard – and we already had the two 70cm mattresses.
This is not a serious attempt to copy the PS 2012 bed (why don’t they name the items in the PS collection?), but more a thrifty tribute to its great retro looks and clever design.

There are things I would do better if I were to make this bed again (they are mentioned in red). Learn from my mistakes and read about the improvements before you cut the wood..

You need 2 extra pieces of wood for the head and end of the pull-out half  - each 72cm long, and 9cm high and about 2,5 cm thick. You want its top to be at the same height as the top of the original head and end boards when it’s resting on the original side and middle supports, and on the Sultan support slats.

You’ll need a  +/-200cm long slim batten to link the slats which get pulled out, and stop them from sagging.  The screws which attach it to the slats need to be countersunk, to stop the mattress snagging on them. I bought a hardwood one with tapered edges.

I bought 2 metal corner brackets to use as stops –to stop the pull-out half of the bed pulling right out.

You’ll need an electric screwdriver (pretty standard kit, I think) lots of screws,– shorter ones to attach the slats to the side supports and long strong ones to screw the sides together. Torx screws are hugely recommended – specially if, like me, you’re not vastly strong. Take care not to let them twist your wrist off when they tighten!

I used a radial arm saw and a table saw to cut the planks and to cut the left-over planking and legs into new legs. I made extra thick legs for the middle support beam – in retrospect, rather use the original legs/headboard to make these legs – they’re thick enough.
I set the radial arm saw set at 10 degrees to cut slanted legs, and used a bit of oak and black plasterboard screws for the front of the legs that you see in "front" (which is actually a side) .
You’ll need wood filler for hiding the screw heads and filling holes needed for the original assembly.
I painted the bed with one little sample pot of Le Noir & Blanc extra mat in Long Island Grey. Mat is great – it looks chic, I think,  and the lack of reflection is really forgiving – imperfections disappear. 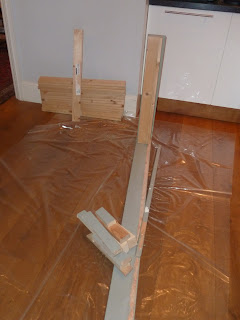 Dismantle everything.
Re-attach the slat supports, but line their bottoms up  with the bottom of the side planks (so a little lower than they were).
Cut the top and bottom planks to 72 cm.
Pre-drill, glue and screw on (with 3 screws) the now 72cm bottom and top to one of the sides.At this stage, I found it useful to rest everything on a flat floor. Line up the top edges of tops and bottoms by putting the first slat in position on the slat support batten and the original middle support. Temporarily screw the inner top and bottom to the outer top and bottom. This makes working alone so much easier. Line up the other side plank and attach the inner top and bottom to it in the correct position (between the green lines in the photo below) , again top edges aligned, again 3 screws, pre-drilled and glued. 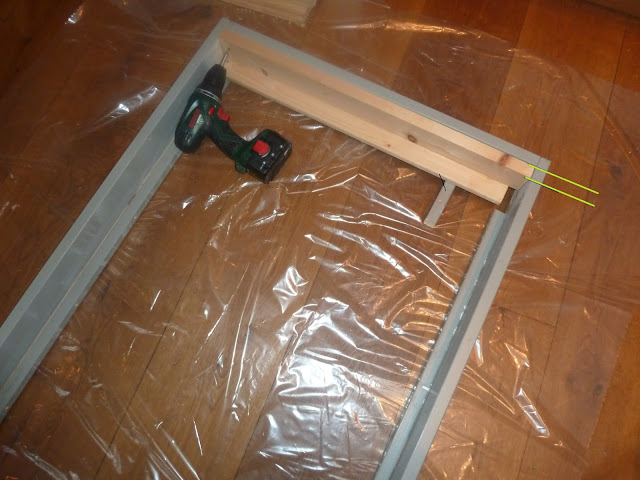 So the outside length measurement is 200cm, the inside length for the static side(the side that stays put when you pull out the pull-out side) is +/- 195cm, and the inside length for the pull-out side is +/- 190cm. I thought my 200cm foam mattresses would squash up to fit in, but it was a squash too far, and they kept popping out and in the end I cut 10cm off the mattresses. Re-sewing the mattress covers wasn’t fun, so if your mattresses are 200cm long, I’d recommend cutting the top and bottom planks 2,5 cm longer (74,5cm) and attaching them to the sides so that the inner length is 200cm for the static bed, and +/- 195cm for the pull-out one.
You can see now that the inner width of the closed [single] bed is 72cm – just a little large for the 70cm mattress. Fully pulled out, the slats overlap +/-4cm, so the double-bed width is 136cm – each mattress can easily squash up 2cm in width- in fact the tension keeps the bed nice and stable.

Attach the new side legs made from the old legs by gluing and screwing through the top of the slat support battens, lining the legs up flush with the sides.
I did the side legs (the ones you don’t see) differently – I made then from left over sides and attached them to the insides of the side, to save even more space in the room – this way the legs don’t butt up against the skirting boards. I wouldn’t do this again – the differences in thickness of the legs on my bed look a bit silly. If you have the Rykene headboard, you’ll have plenty of potential leg wood.

With everything still temporarily screwed together lay down the slats (removing the ribbon and staples was a tedious part of this otherwise fun job – perhaps it’s not utterly necessary to remove them, but it is neater). Depending on the length of your bed(s), you may have to play with the spacing or cut the last slat narrower. Don’t fit them snugly. I did and had to re-do them. Use something –those plastic criss-cross tile spacers or  cocktail toothpicks – something you have lots of and which give appropriate spacing, and put them between the slats at BOTH ENDS. Cocktail toothpicks are the minimum spacing. Otherwise you’ll be cursing and struggling when you pull the beds apart. Those Sultan Lade slats are not perfectly regular, so you have to make allowances. Screw the slats down with one screw each, into the appropriate side support batten (alternating left and right). 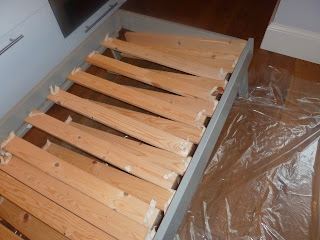 Place the slim long tapered edge batten along the edge of the slats on the pull-out side.  Mark the middle of each pull-out slat on the batten, Pre-drill holes for the screws and use a countersink attachment make space for the screw heads.

To stop the pull-out half of the bed pulling right out, attach the metal corner brackets to the insides of the pull-out bottom and top. Saw a space, the width of the metal, in the middle support.  The metal slips into this cut in the middle support beam, and then cannot pull any further. You may have to cut a little space in the slat support batten of the static bed too, so that the metal bracket doesn’t stop the beds from sliding fully together.

If you are buying the extra head & bottom planks, you might consider approximating the neater system the PS bed uses: buy two thinner planks, cutting one in half lengthways, so that when you attach them together you leave a long groove in the middle of the outer side. You can then put a peg (use the wooden plugs) into each inner side of the original head / bottom planks, which slides in the groove and the beds slide out. Block the groove at the correct (fully pulled out) position. This will stop the pull-out half of the bed pulling right out, and stop it from lifting.

Fill up the screw heads and any old holes with wood filler. 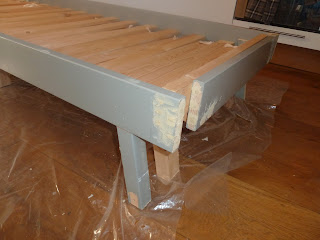 Sand and paint the bits that show. (Remember matt paint forgives.) I left the middle leg of the middle support beam unpainted, so that it doesn’t stand out.  Screw on your choice of decorative leg front. 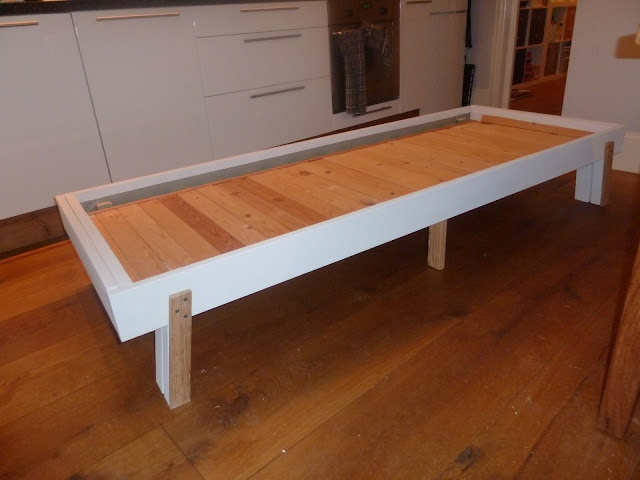 We tested this bed in its double-bed state before releasing it onto guests. By testing I mean we slept in it… All was well – it is no more or less solid or comfortable than the original Rykene bed.  I do think with both mattresses on the single bed it’s much too soft and bouncy to sleep on, but that depends on your mattresses and preferences. It looks neat and works well in our tiny spare rooms.

Hope you enjoy making it, too. Do ask if confused. 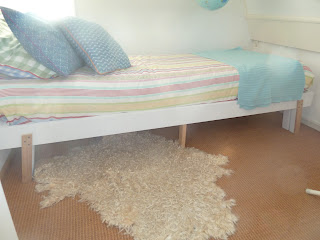 Posted by PracticalDelights at 9:01 AM